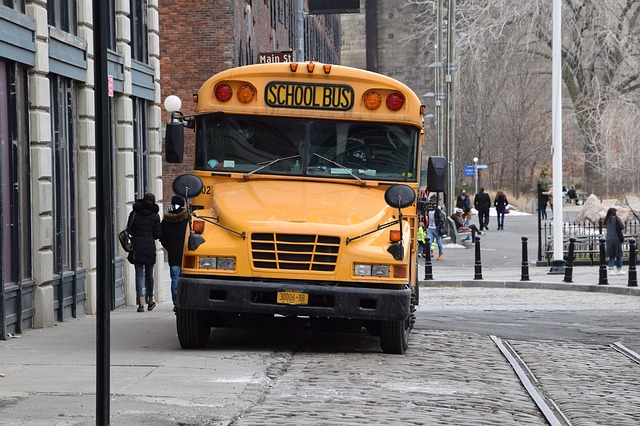 At least thirty people were injured last week in Brooklyn when a bus carrying adults with special needs collided head on with another vehicle. According to the New York Post, the school was heading west near Avenue U and East 61st in the Mill Basin area of Brooklyn at the time of the incident at 9:20 a.m. on May 10th. The scene of the accident was caught on video by a bystander showing both the school bus and the sedan with front end damage on the street.

The other vehicle involved in the crash was a sedan which was traveling in the opposite direction. The driver of the sedan was arrested for aggravated unlicensed operation of a motor vehicle. Charges against the driver are pending.

In total, five patients from the bus were taken to Brookdale Hospital. Thankfully, they had non-like threatening injuries. Four of the five victims were adults with special needs. The other injured person was the bus driver. Of the remaining passengers, twenty-three were evaluated at the scene but cleared by medical personnel. An additional two passengers refused medical service.

Every day there are numerous head-on car accidents (and rideshare accidents) which most commonly occur at intersections. Since these accidents often involve a great impact, they account for a higher percentage of catastrophic injuries and fatalities than most other types of car accidents. Often times, an innocent driver is operating his or her car through an intersection with the intention of going straight, when an inattentive driver coming from the opposite direction negligently makes a left hand turn striking the car which had the right of way. Head-on car accidents also occur because of a driver’s inattentiveness, failure to obey the rules of the road and stop at red lights, stop signs, yield signs, or due to the driver’s intoxication. Freeway head-on car accidents are particularly dangerous due to the high speed of the vehicles. The high speed nature of these accidents often results in a high percentage of catastrophic and life-altering injures. Moreover, despite the fact that an innocent driver or passenger may be wearing a seat belt, the force of the impact from a head on collision is often so great that the seat belt simply does not offer sufficient protection. Further, there have been numerous reported incidents of air bags failing to deploy.  Indeed, although they account for only 2% of all accidents, head-on car accidents cause approximately 10% of all car accident fatalities.

Our NYC bus accident lawyers have handled numerous cases involving serious injuries as a result of a head-on collision. As an example of such a case, recently, we obtained $1.75 million dollars on behalf of a client who received serious orthopedic injuries and disfigurement from a head-on collision caused by a young man using his father’s car. Since the liability of the operator was so clear, and our client’s injuries were so severe, we were able to intimidate the responsible insurance carrier with the threat of an excess verdict which, if obtained, would render its insured personally liable for any excess verdict or judgment above the available insurance coverage. As part of our investigation, we made inquiries into the assets of the defendants and discovered that they were significant, rendering them personally at risk of losing their assets if we obtained a judgment in an amount greater than their bodily injury coverage. This strategy was successful and we were able to resolve this case for the full insurance policy limits in a little more than one year.

Like any serious injury case, as NYC bus accident lawyers, we retain the appropriate experts on liability and damages to maximize your recovery such as accident reconstructionists, engineers, economists, vocational experts and life care planners to prove liability and maximize our client’s financial recovery.

If you have been seriously injured in a head-on collision, or lost a loved one to such an accident, please contact us.

Our office is pleased to announce that we obtained a $8,500,000.00 settlement on behalf of a Staten Island sanitation worker who was injured while on his route.  The accident occurred when the plaintiff was performing his duties as a sanitation worker, walking from one home to the next in Staten Island, New York, when the…